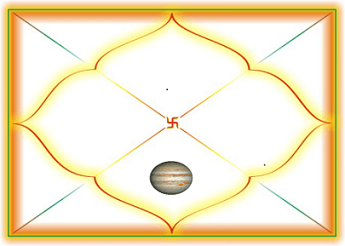 Jupiter is the presence of divine power in your horoscope and has lots of importance in leading a good life.

Jupiter just like any other planet plays its role depending on its lordship like for Capricorn ascendant Jupiter is first rate malefic and gives troubles in its periods.

But the most unique and natural characteristic of Jupiter is that it tends to destroy the significations of the house where it is sitting out of which its effects on 7th house is most mysterious and debatable especially for females.

Jupiter is the significator of the husband in a female horoscope and gives bad results in marriage when placed in 7th house.

This happens coz of “karko bhava nasho” where a significator planet sits in the house which represents the same signification.

This is because Jupiter tends to destroy the house where it is sitting. Therefore Jupiter acts two-fold negative in 7th house for a female.

There are many examples of females where Jupiter in 7th has created a lot of issues in married life.

You can check examples of Medha Patkar for that.

The Same way many other women with Jupiter in 7th house lots of marital instabilities are seen.

Since both are known personality it’s better to analyze their horoscope otherwise I have few other horoscopes which I can put here to show Jupiter bad results in 7th house.

When Jupiter is in signs of Taurus, Cancer, Virgo, Scorpio, and Pisces in the 7th house it leads to lack of love from husband and husband treat them badly.

Unmarried women with Jupiter in seventh house in signs stated above tends to get married late in life and sometimes do not want to get married.

But this is only one side of story Jupiter in 7th aspecting ascendant gives them very spiritual and Noble personality especially when Jupiter has benefic lordship, it also leads to successful career and money.

Condition like retrograde Jupiter, combust Jupiter, low or high degree Jupiter and aspected by malefic cause more problems to it.