Timing Of Marriage Via Vedic Astrology

Questions related to timing of marriage like “when I will get married” are quite frequent nowadays and it is quite obvious too, as we all know marriage is the most important event in a human life.

The world itself sustain on the concept of marriage only.

The main purpose of marriage is to keep the society running with new birth and it makes a person serious about his work, in a way marriage is the basic pillar of society.

Many times we have seen how drastically people change after marriage in a good way because they sense the responsibility towards their better half.

Now since matchmaking comes first in our mind whenever we relate marriage to astrology, so here we will discuss various aspects of marriage via Astrology.

The first common question is when am I going to get married? Yes, this is the query which comes in every consultation!!

There are few methods by which marriage timing can be checked.

Before proceeding to marriage timing you should know little basic like 7th house rules over your marriage and there is Navamsha chart also called as D-9 which rules over marriage matters.

Now proceeding with the main aim of the article.

1. Check your seventh house which planet is ruling your 7th house.

2.Check where is your 7th lord is placed, is it in trines houses(1,5,9) in quadrant (1,4,7,10) or evil houses(6,8,12) placement of 7th lord in trine and quadrants are very supportive to get married and generally this it gives a good life partner along with awesome married life.

3.In your navamsha aka d-9 check which planet rules over 7th house and check if any planet is sitting there.

4.Now coming back to d-1 chart check if any other planets are affecting your 7th lord or not via exchange, conjunction, mutual aspects etc.

Now see in your chart above-mentioned points and check your Dasha pattern, you will get married when your Dasha ruler is associated with your 7th lord.

Now there are many ways planets are associated with each other but for keeping it simple I want you to take consideration of given example.

Suppose Mr.Brock is of Aries ascendant and Venus rules over his 7th house now currently Mr.Brock is of 23 age and he will be having Antardasha of Venus when he will of 27 age, so here there are high chances that Mr.Brock will get married when he will hit his Venus antardasha.

Of course here you need to see the placement of Venus in d-1 and d-9 if its weak or strong or is there any marriage delaying thing in his chart. But for this write-up, I am taking Mr.Brock’s Venus as strong and placed in a good house.

The Same way a person can get married if he or she is running Dasha of 7th lord or planet associated with the 7th house of d-9, the same aspect can be used using D-60R.

Keep above four points in your mind or write them somewhere, as now I am going to shift towards other technique to find marriage timings.

Add the longitude of the lagan lord and the seventh lord, if the total exceeds 360 degrees, deduct this.The resultant point is called as Vvoaha Sabam or the marriage time.Now, whenever Jupiter or Venus will transit over Vvoaha Saham the person can get married.

Above method may take time to master though it’s quite easy but works with other factors.

Now check degrees of your planets and the planet with the lowest degree will be your darakarka(spouse significator) now using chara Dasha system check from running Dasha rashi where darakarka is falling, if it is falling on 5th,7th,11th or in the zodiac itself the person will get marry in that char Dasha.

Above method is as per Jaimini Astrology!!

Using asthvarga also you can find marriage timings, open your Asthvarga table and add points from 1st to 7th house and now divide it by 27, why 27??

Because there are total 27 nakshatras and Nakshatra are the pillar of astrology!!

Coming back to point, now after dividing you will find a resultant, suppose you got a resultant of 9 now see which Nakshatra comes in 9th, no, here it will be Ashlesha.

Now whenever Jupiter in case of females and Venus in case of males transits over Ashlesha the person will get married.You can find marriage time using Asthvarga Dasha also but it is beyond the scope of this article.

Will deal with it in a separate chapter.

Same way you can use yogini Dasha or Kaal chakra dahsa or KP method but above mention, methods are quite basic and easy to use.

Here you need to check if Saturn and Jupiter are activating your 7th house or even their aspect or union with the 7th lord is also capable to generate marriage.

So we have seen the various methods which can help you to predict the timing of marriage and now it is the time we apply it to a horoscope.

Bill Clinton got married on 11-10-1975 and he was in RAHU-SATURN, Saturn is lord of navamsha and gave him marriage. 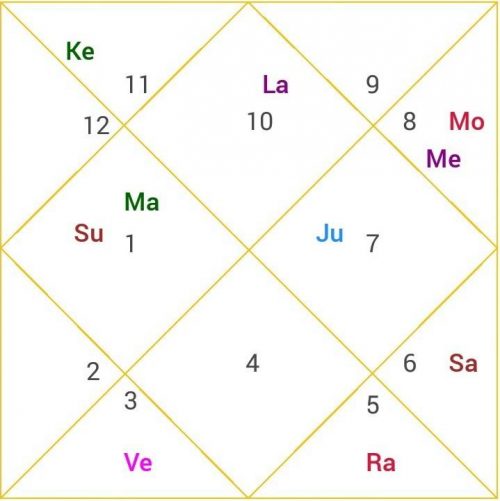 You can see all parameters are fulfilling here and this is how one should find the timing o marriage in a horoscope.

But make sure you do gauge the overall aspect of the marriage from the horoscope and then apply rules holistically on it.