Each of these charts has its own use,which readers will come to know in coming articles. A planet becomes highly beneficial if he secures 5 or more bindus in its own Ashtakvarga. Where as a planet with less than 4 bindus acts negatively. Results of planets with specific numbers of benefic points will be discussed later in detailed manner.

For convenience of readers Ashtakvarga for following Horoscope is done by me. We will call this Horoscope as example Horoscope.

In this Horoscope Sun is in Pisces. For construction of bhinna ashtakavarga of Sun,following steps should be followed.
1.Note planet Sun position which is in Pisces here.
2.For sake of calculations make a separate blank Horoscope,with Ascendant as Pisces with planet Sun in it. 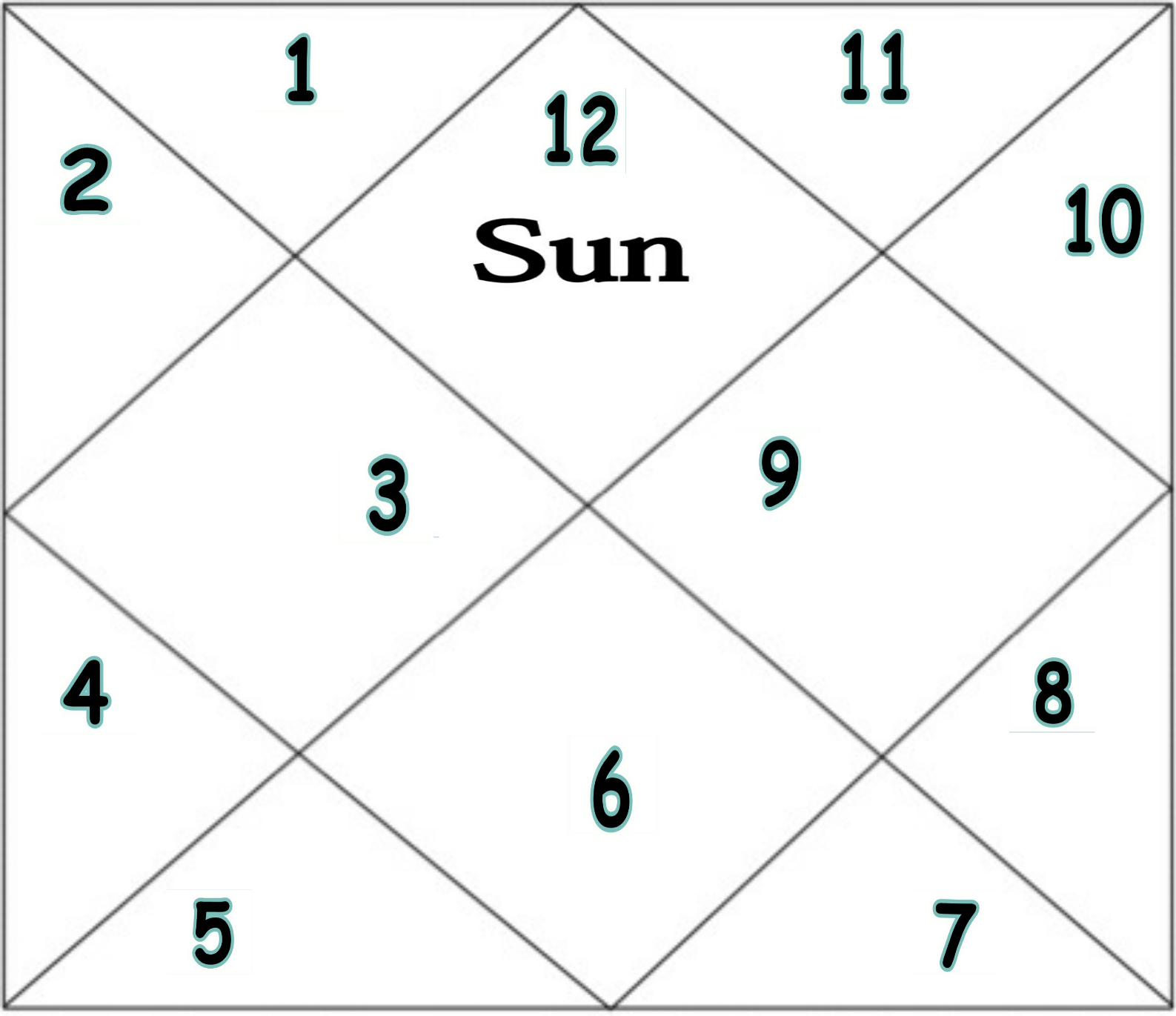 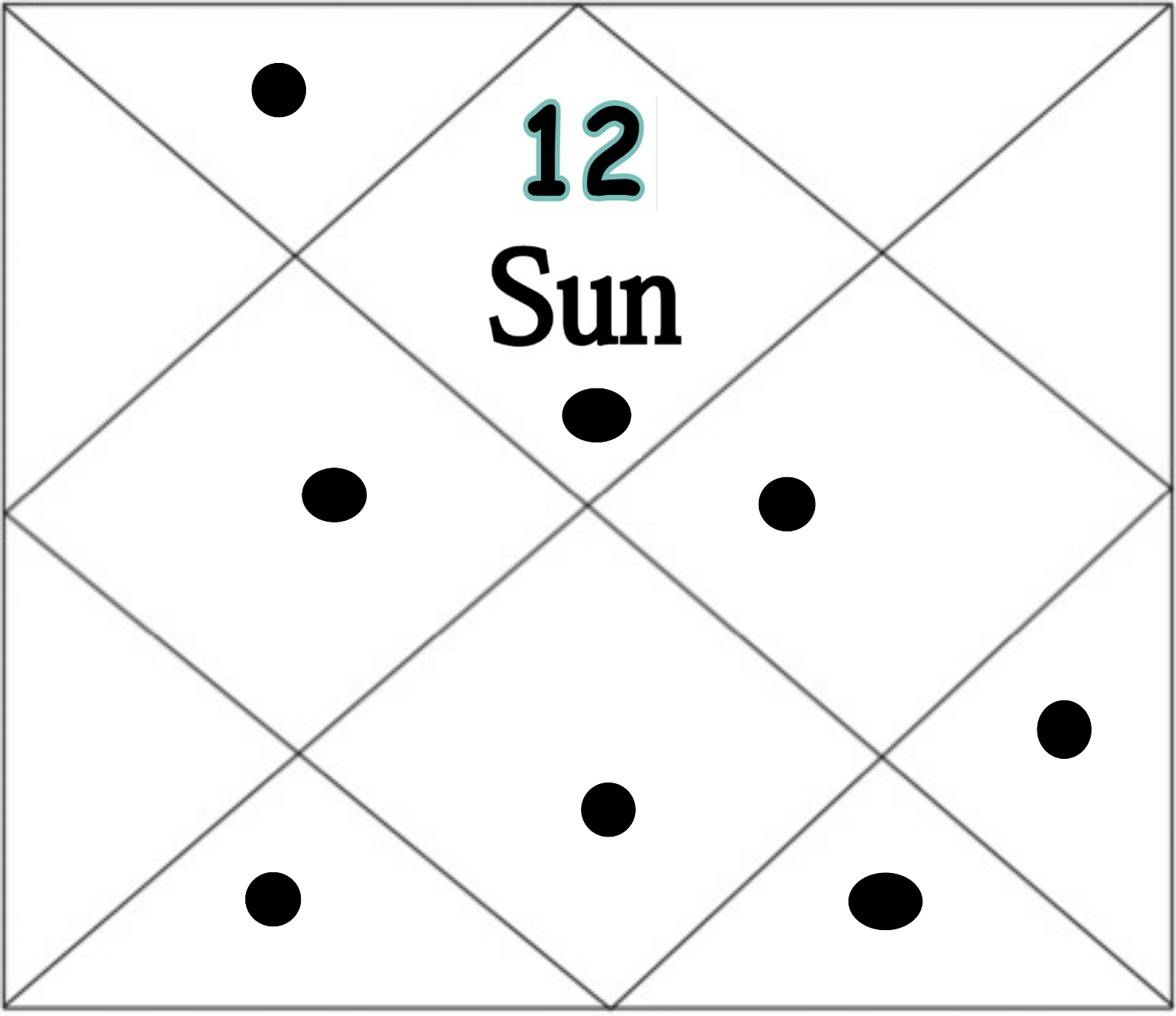 Same way Sun is benefic from Mon in following positions 3,6,10,11.
Again repeat the same procedure,make a blank Horoscope by pen and mark its Ascendant with Moon placement. Which is in Virgo in this example Horoscope.

Here in example Horoscope dots will in Capricorn, Aries,Leo and Virgo zodiacs.
Similarly Sun Ashtakvarga from other planets.
From Mars – Sun is benefic in 1,2,4,7,8,9,10,11 positions. 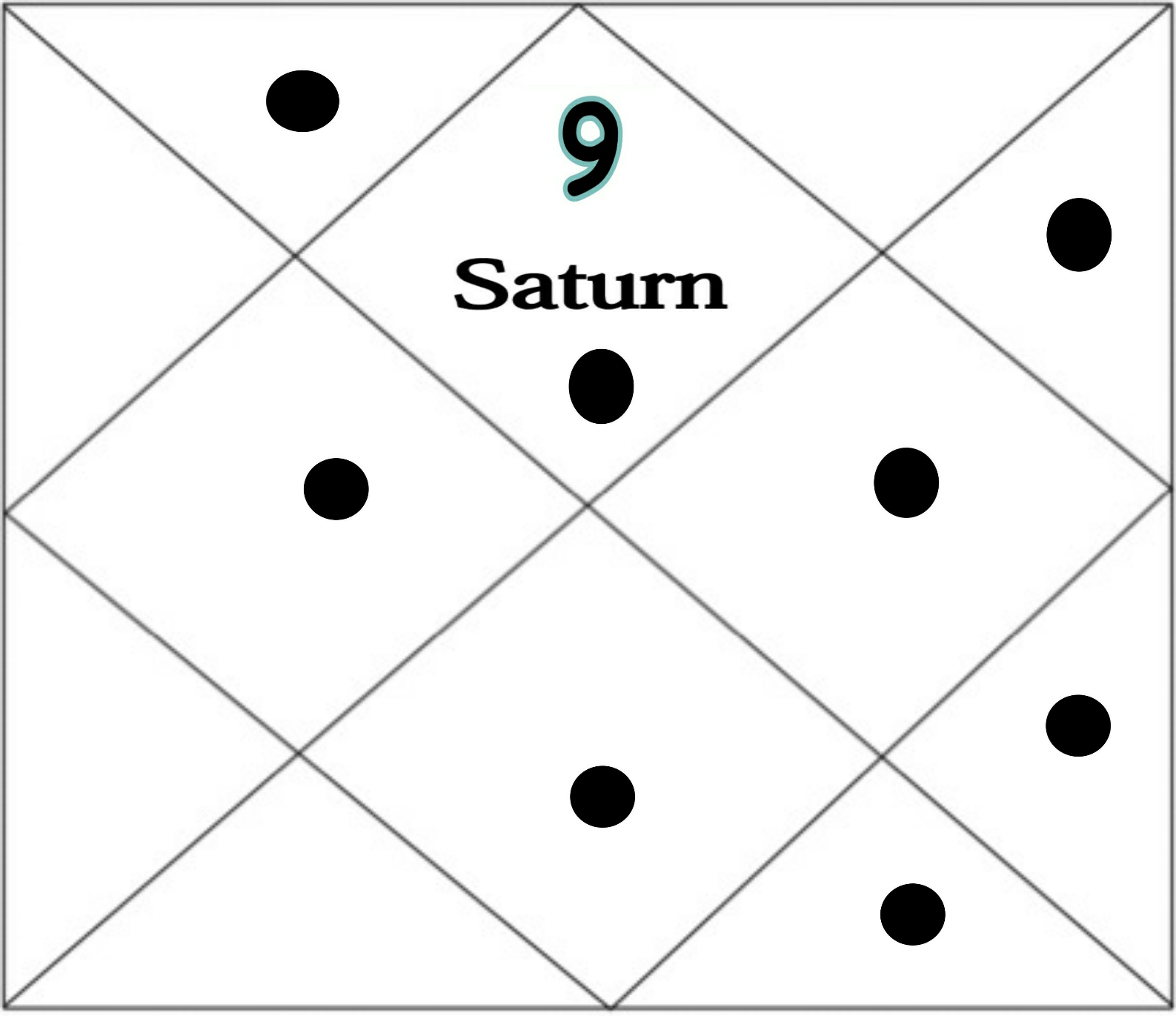 All 8 charts pertaining to a planet can be reduced to a single diagram(fig no.9)

Similarly Bhinna Ashtakavarga of other remaining planets viz Moon,Mars,Mercury,Jupiter, Venus,Saturn should be made.
For other planets i am not making Ashtakvarga  individually readers can try it for their practice.

Readers can make Ashtakavarga of planets using reference given above.
These charts can be used to judge Transit results of planets. In example Horoscope Sun is gaining 7 benefic points in Capricorn which means Sun Transit in Capricorn will be good for native.

All benefic points are added together here.
1.Add all benefic points contained in Aries zodiac in Bhinna Ashtakavarga of Sun,Moon,Mars,Mercury, Jupiter, Venus,Saturn.
In example horoscope, benefic bindus in Aries Zodiacs are 3+4+3+6+3+4+5=28.
Same way for Taurus the aggregate will be 24
For Gemini 26
For Cancer 33
For Leo 20
For Virgo 22
For Libra 31
For Scorpio 30
For Sagittarius 35
For Capricorn 27
For Aquarius 32
For Pisces 29
Put these numbers in horoscope with Aquarius Ascendent. The final outcome will be Samudaya Ashtakavarga for example horoscope.

In actual  practice, its rare to come across 54 points in 11th house. While 34 points in 6th can give health troubles on actual grounds.I have some Horoscopes where large no of benefic points in 6th house caused severe health issues.

The native of Horoscope shown  above and have 38 points in 6th house and is bedridden for last one year due to an accident which lead to damage to his spine.

One more Horoscope Fig no.19,where 38 points in 6th house leads to frequent injuries to native,he gets into fights quite often and is a sports person.

Same way 19 benefic points in 7th seems to be wrong, considering Horoscopes on actual practices benefic points between 24 to 28 protects  marriage.Less then 24 and more than 28 can cause marital disharmony to native.

Iam putting few Horoscope here who are going through marital crises in their life.

Native of Horoscope no.20 have exact 19 point which as per commentaries is sufficient. But in reality the native of this Horoscope never had a good marital life and is on verge of divorce.

I would like to put Horoscope(fig no-21)of another native who have 33 points in his 7th house and his story is also same.

Or may be author of Prasna Marga wanted to say that a person should have high benefic  points in 10th house, in order to achieve high status in life which will lead to high gains through 11th  house, so that natives remains satisfied.

We will discuss on all techniques of Samudaya Ashtakavarga in separate chapters once I complete all basics first.

Events like marriage, job, progeny, health troubles, death of relatives, direction where you can have more success and many other events can be seen using Samudaya Ashtakavarga.

PRASTHARA ASHTAKAVARGA
It’s is called as spread out Ashtakvarga also and requires use of Bhinna Ashtakavarga but In  detailed manner where Kakasha is also shown along with benefic points in zodiacs.
Here the benefic points contributed by each of the planets are isolated so that while predicting the results of Dasha and Transits exact nature if results can be known.
I will explain the utility of Prasthara Ashtakavarga with example Horoscope.

Observe the  Prasthara ashtakavarga of planet Sun of example chart.
There are 8 rows starting from planet Sun,Moon,Mars,Mercury, Jupiter,Venus,Saturn and Ascendant in the end.
These are called Kakshas.
There are 12 columns which corresponds to 12 zodiac starting from Aries to Pisces.Here in Prasthara Asthvarga things are shown in detailed manner,where benfic bindus contributed by planets on zodiacs are shown clearly.

Currently Native of example Horoscope is running  Jupiter – Saturn. Saturn is in Sagittarius and in Ashtakavarga of Jupiter(Fig no.23), Saturn is contributing benefic point to Sagittarius. So far Native have enjoyed good results of Saturn antardasha in Jupiter mahadasha.He got salary hike,got married in July 2015 and his sister is getting married in Jan-2016.

Since Saturn is having 6 benefic dots out of 8 in its zodiac Sagittarius. Native will continue to enjoy good results of it.

Analysis of Dasha results  requires more holistic analysis where you have to give importance of planet in houses,divisional charts,Significations of planet and houses.Ashtakvarga can act as a supplement to verify your results and have some techniques which can not found in other method of Astrology.
Prasthara Ashtakavarga is of great use in judging results of Transit & Dasha’s. Readers are advised to go through Prasthara Ashtakavarga of their own Horoscope for more understanding.
In next article we will discuss on Significations of planets which are required to learn while giving results of Dasha & Transit using Ashtakvarga.