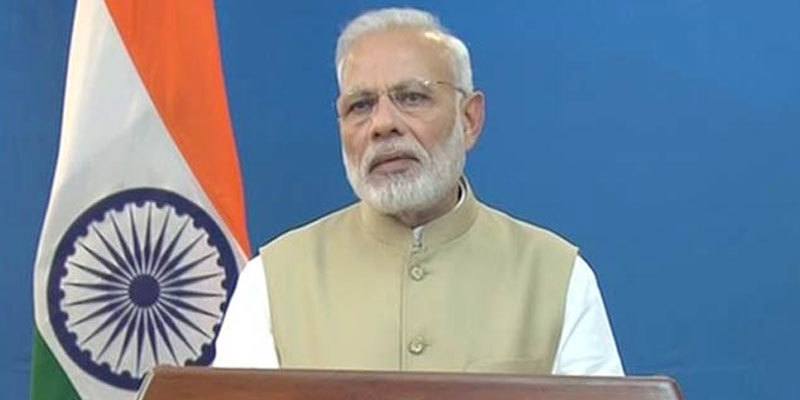 The very first thing which need attention here is validity of his Horoscope.

There is a conflicting theory about this and some people believe it is Libra Ascendant and some believes it is Scorpio Ascendant.

Here, are the two Horoscopes given below:

From his life events it seems that Scorpio ascendant is the right ascendant for him, but scorpio ascendant will contain many Navmasha signs and again with 17:00 hrs, Cancer Navamsha is looking correct.

Here, is the explanations for same. It is short & sweet!

It is a well known fact that Narendra Modi ignored his spouse for the sake of services towards this Nation.

Now, see the Cancer Navamsha, here we can see Mars is ascendant in debilitated state (marked by a arrow in image given below).

Similarly, Cancer navamsha have Sun & Mercury in his 7th House, so again Marriage related aspects are looking weak in his Horoscope.

I can give many explanations based on his Divisional Charts but it will be lengthy.

Rather what I will do here is that I will give explanations of his life events separately which will serve both the purpose of explanation of his right birth time & knowledge on his Horoscope which is the main purpose here.

Narendra Modi has been through tremendous ups & downs and it is easy to trace his events.

If you trace his life in Mercury Dasha then you will find that it went in wandering mostly.

He left his home and was looking for knowledge and was making his spiritual understanding better.

He went to many Math like Belur Math and ashrams like in Almora. Every where he was turned down for one or another reasons.

Narendra Modi was inspired by Swami Vivek Anand and if you know Viveka Ananda then you will realize that Narendra Modi followed his foot steps only.

Here, reasons is clearly visible through his Horoscope, Mercury is lord of the 8th & 11th house and is considered as a malefic for Scorpio Ascendant.

Mercury is placed in his 11th House in exalted sign and is with 10th lord Sun.

8th lord is a planet of transformation and this what happened to him in Mercury dasha. It is because of Mercury he developed into a spiritual person, though other factors are also there. But, dasha of Mercury in early age moulded his mind in this direction.

When a person becomes spiritually evolved, what is looks for ? He looks for a purpose and he joined RSS, his ideology were in symphony with RSS and he found a purpose.

2. In 1985 he was assigned to BJP: This happened in the end phase of Ketu Mahadasha, and I am very sure during whole Ketu Dasha he went through a tough time and learnt a lot.

Ketu is placed in 11th house and is with 10th lord Sun & 11th lord Mercury itself. This makes Ketu potent enough to deliver and Ketu dasha made him work for RSS and right before it ended, it allowed Modi to join a Political Party which I think was the most important event and made the background ready for him.

3. In year 2001 he became Chief Minister of Gujrat: I think we all are aware of the fact that he is easily the most famous and popular CM. No, other CM can even come close to his work in future.

Technically this is not a auspicious union except for success in Politics.

Now, see his D-10, you will see the Saturn & Venus are in Parivartan Yoga.

During his tenure as CM of Gujarat everything happened in extreme. I guess you got my point here!!

4.Riots in 2002: Right away after becoming the CM of Gujrat, Narendra Modi faced the biggest challenge of his life.

There Riots in Gujrat and despite of that Late Atal Bihari Vajpayee kept his trust on him.

See the debilitation of Mars in his D-10.

Due to this Mars he faced such a tragedy in his rulership, and this placement of Mars is responsible for brave decisions he take i.e demonetisation etc .

He was in Moon Mahadasha and Rahu antardasha during that time.

Here, you can see that Moon is debilitated and is place with Mars which is in own sign, this forms a very potent Rajyoga which is known as Nechabhanga Rajyoga.

So above given information is enough to explain you why Scorpio ascendant is right for Narendra Modi.

Let's see what potent combinations are present in his Horoscope.

There are many rajyoga yoga in his horoscope but I am stating those which holds true on practical grounds and which defines his life.

1. Union of Moon & Mars: Moon is lord of the 9th house and is placed in 1st house, placement of 9th lord in 1st house makes him religious, spiritual, lucky, gave him fame etc.

The very first thing to the analysis here is that he have union of 9th Lord Moon with ascendant Lord Mars in the 1st House itself.

So, two trine Lord's are together and this explains his spiritual nature.

It is a known fact that Narendra Modi follows religious practices and follows rules and regulations for it (bhramachrya).

This quality comes due to 9th Lord Moon and its union with ascendant Lord in ascendant itself.

Note that,Moon is debilitated here and is with Mars which is in own sign this generates a powerful neechabhanga rajyoga for him.

2.Placement of Sun and Mercury in 11th house: Sun is lord of the 10th house and is sitting with 11th lord Mercury.

This is a Rajyoga which is happening due to 10th & 11th lords. This makes him popular among masses.

If you know ashtakvarga, then you can understand that, the more is the gap between 10th & 11th lord that too in increasing order, greater is the success in life.

4. Ruchaka Yoga: Placement of planet Mars in 1st house is forming Ruchaka Yoga in his Horoscope. This Yoga is known to give command and authority.

5.Mutual aspect between Jupiter, Venus & Saturn: Jupiter is placed in 4th house in Aquarius sign where it is considered as strong, Venus is placed in 10th house with Saturn with combines lordship effects of 3rd, 4th, 7th & 12th house.

So many auspicious houses are connecting here where a blend of power, efforts, patience, charisma and victory is seen.

You can disesct this yoga in many ways, for example first you can read it as mutual aspect between 2nd & 7th lord, then 2nd & 3rd lord and so on.

Both are making a union in House of career i.e 10th house. If you understand Jaimini principals then this is the biggest rajyoga in it.

This rajyoga is in symphony with hsi other rajyoga and confirms the potentail in his horoscope.

Even in Karakasmaha chart both Saturn and Venus are making a union in auspicous 9th house.

Whenever you see a Horoscope, then always make sure you see it using many methods in your disposal. This will give you more clarity about natives life and his feature.

Narendra Modi is going to win 2019 elections and there is no doubt in that. He is in Mahadasha of Moon which is making a grand rajyoga with Mars in the 1st house.

This is happening in Moon-Ketu,planet Ketu performs well in 11th house. Around the results of 2019 elections, planet Jupiter will be going through his 1st house over 1st and 9th lord, which are Moon & Mars.

This looks very strong and same time Saturn will be retrograde over his 2nd house. Here, if we use double transit method then his 1st house is getting all the coverage.

If we see through Jaimini Chara Dasha, then you can see Aquarius Mahadasha and Libra antardasha around elections.

Here, Jupiter is in ascendant which is Matrikaraka and Moon & Mars are in 10th house, where Mars is Putrakaraka & Moon is Bhartukaraka which is a excellent placement for success in politics.

Narendra Modi will be in Moon Dasha till 2021 and then Mars mahadasha will start and will last till November 2028.

I have mentioned how this placement of Mars is causing a rajyoga in his horoscope and considering the foundation he have made for India from 2014-2019. I think his second tenure as PM will take India where everyone will be amazed.

People have a lot of expectations with our country and i think he will be able to deliver it.

Though considering allingements in Narendra Modi Horoscope, i think during his old age he will be suffering from a chronic health issues though his longevity is looking good but old age will test him a lot.

So here we are at the end of Narendra Modi Horoscope and I found Scorpio ascendant ok on Narendra Modi, I don't know why people think about Libra ascendant.

Though we do need to understand there is a chance that these details may not really belong to him, but that is possible on everyone who is a Public Figure.