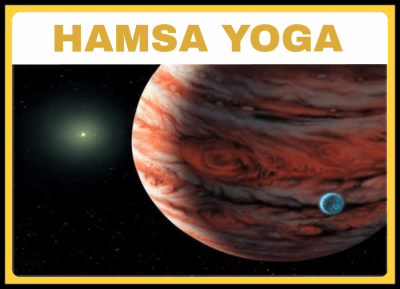 Hamsa Yoga is one of the Panchmahapurush Yoga other being  Ruchaka Yoga, Bhadra Yoga, Sasa Yoga and Malavya Yoga. Hamsa Yoga is fomed by planet Jupiter which is considered as biggest benific planet in astrology.

When planet Jupiter is in one of the Kendra houses(1st, 4th, 7th & 10th) in a sign identical to its own(Pisces), exalted(Cancer) or mooltrikone(Saggitraius) signs them Hamsa Yoga is said to be formed.

In other words, Hamsa Yoga cannot occur with reference to every sign of the zodiac in the same house and it can be explained in a simple manner like this.

The person born with Hamsa Yoga at birth will be a king, a high political or government dignitary respected by good people. He will have in his hands and feet marks of Conch, Lotus, Fish or Ankusha. His body will be beautiful, will eat delicious food and will be virtuous. He will possess all good qualities of Jupiter and his advice will prosper others. Hamsa Yoga definitely combines the positive results of planet Jupiter along with signs Cancer, Sagittarius, and Pisces.

Jupiter comes into signs of Cancer, Sagittarius or Pisces after gaps of few years.Therefore making it a rare Yoga and always remember rarity makes things special in astrology.

Hamsa Yoga works well for Aries, Gemini, Cancer, Virgo, Sagittarius and Pisces ascendants because Jupiter is a functional benefic planet for these ascendants and don’t carry malefic results due to its ownership over bad houses. Hamsa Yoga works well in all Cardinal houses but since Jupiter gets digbali in the first house, technically Jupiter should perform better here than other houses.

Like it’s exaltation in Cancer ascendant or its placements in the first house of Sagittarius or Pieces ascendant.

Those born in fixed signs (Taurus, Leo, Scorpio, and Aquarius) cannot possess Hamsa Yoga since neither of Jupiter’s exaltation sign nor own house can be identical within a Kendra.

Just like interpretation any other yoga, here Jupiter should be free from following afflictions, otherwise, results of Hamsa Yoga may not be there or may manifest in less quantity.

Above five parameters are very important and should be checked before judging Hamsa Yoga results.

There are many popular public figures who have Hamsa Yoga working in fully in their horoscopes.

Here Hamsa Yoga is forming in 7th house and is aspected by benefic Venus. This leads to the formation of fully functional Hamsa Yoga. Ben Affleck has enjoyed all good results of Hamsa Yoga in his life.

Here again, Hamsa Yoga is forming in 7th house and is in cardinal to Venus which is creating Malaviya Yoga in 10th house. Jayalalitha enjoyed all great results of Hamsa Yoga in her life.

Here Hamsa Yoga is forming in the 10th house though Jupiter is a functional malefic for Libra ascendant but still its strong positions lead to knowledge and spiritual progress in K.N Rao’s life.

Here, Hamsa Yoga is forming in 10th house with Libra as ascendant. The role of Jupiter for Libra ascendant is not supportive but due to its strong placement and involvement in Gajakesari Yoga, native was a great poet and writer and got the worldwide recognition due to Hamsa Yoga.

So you have seen how hamsa yoga forms and its effects, in my astrology practices I have found people with Hamsa Yoga as very humble and gentle in their approach. They are naturally spiritual and are very optimistic in life.